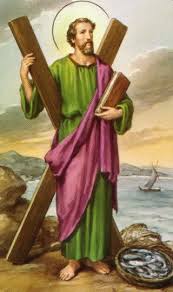 Andrew (meaning manly), son of Jonah, was born in Bethsaida of Galilee. He was the elder brother of Peter and both were fishermen. From the Gospel of St. John, we learn that St. Andrew was a disciple of John the Baptist, whose testimony first led him and John the Evangelist to follow Jesus. St. Andrew at once recognized Jesus as the Messiah and hastened to introduce Him to his brother, Peter. Henceforth the two brothers were disciples of Christ – “Fishers of men”. On a subsequent occasion, prior to the final call to the apostolate, they were called to a closer companionship and then they left all things to follow Jesus.

St. Andrew was the first apostle called by Our Lord and in the various lists of Apostles given in the New Testament he is always numbered among the first four. From what we know of the Apostles generally, we can, of course, supplement somewhat these few details. As one of the Twelve, St. Andrew was admitted to the closest familiarity with Our Lord during His public life; he was present at the Last Supper; beheld the risen Lord; witnessed the Ascension; shared in the graces and gifts of the first Pentecost and helped, amid threats and persecution, to establish the Faith in Palestine.

When the Apostles went forth to preach to the nations, St. Andrew seems to have taken an important part, but unfortunately we have no certainty as to the extent or place of his labours. Legend has it that St. Andrew preached the Good News in what is now modern Greece and Turkey.

It is generally agreed that he was crucified by the order of the Roman Governor, Aegeas or Aegeates, at Patrae in Achaia and that he was bound, not nailed, to a cross made like the letter X (now known as St. Andrew’s cross). In this way it was hoped to prolong his sufferings and in fact, St. Andrew is known to have preached to the faithful for two days before expiring. His martyrdom took place during the reign of Nero, on 30th November, A.D. 60.

St. Andrew is the chief patron of Russia and Scotland, also of fisherman and spinsters.